The unusual detached tower dates from the 15th century and is thought to have been built as a flanking tower to guard the western approach to the Abbey. It houses a ring of six bells. The largest (tenor) bell weighs 8.5 cwt and is in the key of G. All of the bells, except the lightest (treble), were cast in the 17th century between 1602 (3rd bell, cast by Hugh Watts I) and 1655 (2nd bell, cast by Christopher Graie (Graye) who for a short time had a foundry at Ampthill). Details of the bells, their founders, and their inscriptions are given below.

The 5th bell is famously referred to as Bunyan’s bell, which he is reputed to have rung (sic) from outside the tower. Bunyan could not forsake his love of bell ringing (or dancing) and considering it to be evil, he feared that God would cause the tower to fall on him as a punishment (“I durst not stand at the steeple door any longer and was forced to flee”). The bell’s founder is unknown but its inscription (an initial cross with alphabet lettering, some inverted) suggests Newcombe of Leicester, in about 1625. Other examples of bells with similar alphabet lettering and known to be cast by Newcombe are to be found in Leicestershire and Northamptonshire (a number of examples) and at Upton Magna Shropshire (dated 1605). The earlier tenor bell (1604) is also by Newcombe.

Robert Newcombe went into partnership with Francis Watts in about 1598 and is thought to have had a foundry in Bedford. Robert Newcombe’s son Edward Newcombe (I) operated in Bedford from 1599-1622, partnering with Hugh Watts (I) 1600-1615 / Hugh Watts (II) 1615-1642. It is therefore likely that the Elstow tenor bell was cast in Bedford and possibly the 5th also, otherwise at Leicester.

The 4th bell, the latest of the 17th century bells, was cast by James Keene. His predecessor, Francis Keene, was assistant to Edward Newcombe (I) and Hugh Watts (II) at their Bedford foundry. He moved to Woodstock (Oxon) in 1631, setting up his own foundry, so this bell is likely to have been cast in Bedford just prior to his move, and otherwise at Woodstock.

Given the family and/or partnering relationships between the various founders of the 17th century bells, it is perhaps not surprising that they were all cast and acquired within a 51-year period. Excluding the 2nd bell cast by Christopher Graie, whose relationship with the other founders is less clear, the others were cast and installed over a shorter 37-year period.

The tower is thought to have been the inspiration for the castle of Beelzebub from which Bunyan portrayed arrows being shot at pilgrims entering the gate in his ‘Pilgrims Progress’. Bunyan’s aforementioned association with the tower and bell ringing, prior to him becoming a non-conformist, have become legendary.

Thomas North in his ‘The Church Bells of Bedfordshire’ (1883) writes:

“On conversion from a careless life to a religious one his then over sensitive mind caused him to give up a practice that he doubtless felt that he loved too well. Even then the sound of the bells drew him to the belfry although he no longer handled a rope”.

“He so hankered after this old amusement that although he did not pull a rope himself he would go and look at the ringers, not without a secret feeling that to do so was unbecoming the religious character he professed; a fear came upon him that one of the bells might fall. To secure himself against such an accident he stood under a beam  that lay athwart the steeple from side to side, but his apprehensions being once awakened, he then considered that the bell might fall with a awing, hit the wall first, rebound, and to strike him in its descent. Upon this he retired to the steeple door, thinking himself safe enough there; for if the bell should fall, he might slip out. Father than the door he did not venture, nor did he long continue to think himself safe enough there, for the next fancy that possessed him was that the steeple itself might fall, and this so much scared him that he dared not stand at the door any longer, but fled for fear the tower should come down upon him”

“The intense love of bells and their music was however so entrained into his nature that it finds expression more than once in his ‘Pilgrims Progress’. For as the pilgrims approached the Heavenly City “they thought they heard all the bells therein to ring to welcome them thereto”. And when they had entered; “then I heard in my dream that all the bells in the city rang again for joy”

It should be noted that at the time of Bunyan’s youth (during the 1640s) when he would have been bell ringing, the current day practice of ringing bells ‘full circle’ that first developed in England, was in its infancy and not very common. It is therefore improbable that Bunyan would have rung the bells in this manner (especially from outside the tower!). It is more likely that the bells were hung with half or possibly three-quarter wheels and Bunyan was in fact swing-chiming the bell, something that would have been possible from a rope extending outside the tower.

This said, the first recorded evidence of “change ringing” actually originates from Bedfordshire and a sermon entitled “The Devils Banquet” preached by Thomas Adams at the nearby village of Willington in 1614. In order to exercise the necessary control for change-ringing the bells are required to be equipped with at least a three-quarter and preferably a complete wheel, so although unlikely, it is possible that change-ringing was practiced at Elstow during Bunyan’s time; this a possible reason for adding more bells during that period.

There would have been four bells at the time that Bunyan was ringing during the 1640s, the 2nd bell not being cast until 1655. Following his service in the parliamentary militia (1644-47) and marriage (~1649) Bunyan subsequently moved to St Cuthbert’s Bedford (1656) by which time he had joined the non-conformist free church, and he would not have been ringing.

There is one recorded peal rung on the original five bells (10/4/1902) prior to their restoration, and so during the intervening almost 300 years, the half or three-quarter wheels will have been replaced by full wheels, enabling the bell to be controlled sufficiently for change ringing to be possible. 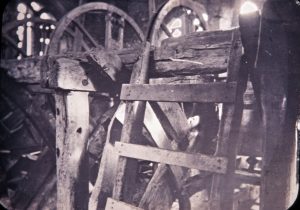 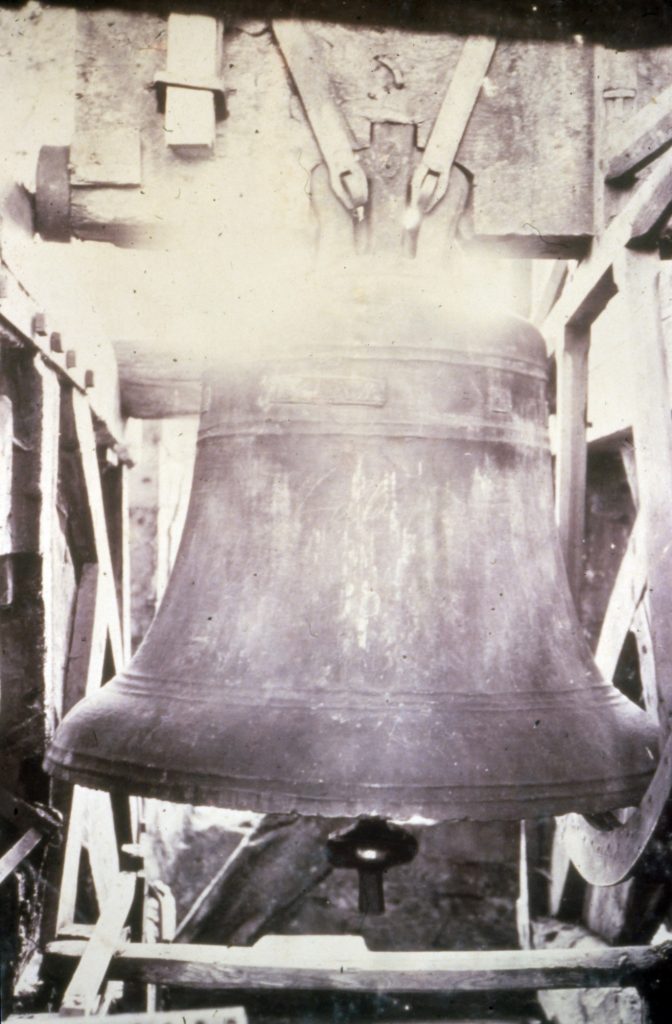 The bells were re-hung in 1908 by Alfred Bowell of Ipswich when the treble bell was added and the original five quarter-turned and their canons removed. The work was funded by Samuel Whitbread III (Patron and brewer) whose name is inscribed on the treble. It is a classic Bowell installation, comprising a low side fabricated steel girder frame in two parallel rows (E-W); the bells hung on plain bearings with girder headstocks and wooden shafted clappers. Beyond routine maintenance, no work has been done of the bells since 1908, and it is a tribute to Bowell’s ingenuity and engineering skills that more than 110 years on they remain one of Bedfordshire’s easiest-going rings. 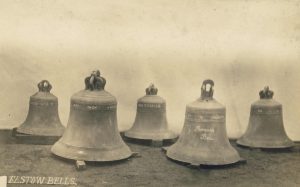 The original five bells at the works of Alfred Bowell in 1908 prior to their cannons (attached on the crown of the bells) being removed. (Bunyan’s Bell 2nd from right)

Although the back five bells are all early 17th century, only the 5th bell is ‘listed’ as being of historic interest on the Church Buildings Council list of protected bells. While bells of this age are often ‘listed’, there are a number of examples of similarly aged bells cast by the same founders in Bedfordshire and the surrounding counties from which the cannons have not been removed. Consequently, the other Elstow bells are neither especially rare nor the best examples.

The bells have been chip tuned (i.e. tuned manually using a chisel rather than the modern practice of turning on a lathe) to sound a diatonic scale; bells 3, 4, and 5 have metal removed from the inside (to flatten their tone) and the 2nd from its outer lip (to sharpen its tone). It is possible that the tuning pre-dates the 1908 restoration. The bells are not harmonically tuned (i.e. the five principle partial tones of each bell are not tuned on the true harmonic principle reintroduced in the 1890s, by Gillet & Johnston, Croydon / Taylors of Loughborough). For this reason, they sound somewhat discordant to some ears compared with many other local rings (e.g. at Cardington, Bromham, and Kempston). Even if Bowell had the capability to tune to this principle in 1908, the bell castings are thin (as with many bells of this age) and there would have been risk in removing too much metal during the tuning process.  The frequency of the nominal (one of the five principal tones) and the approximate note heard by the ear are included in the above table and a short recording of the bells is attached  <<ATTACH .WAV FILE>> 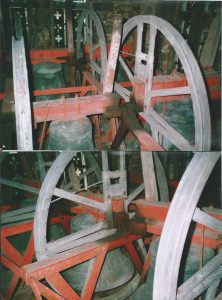 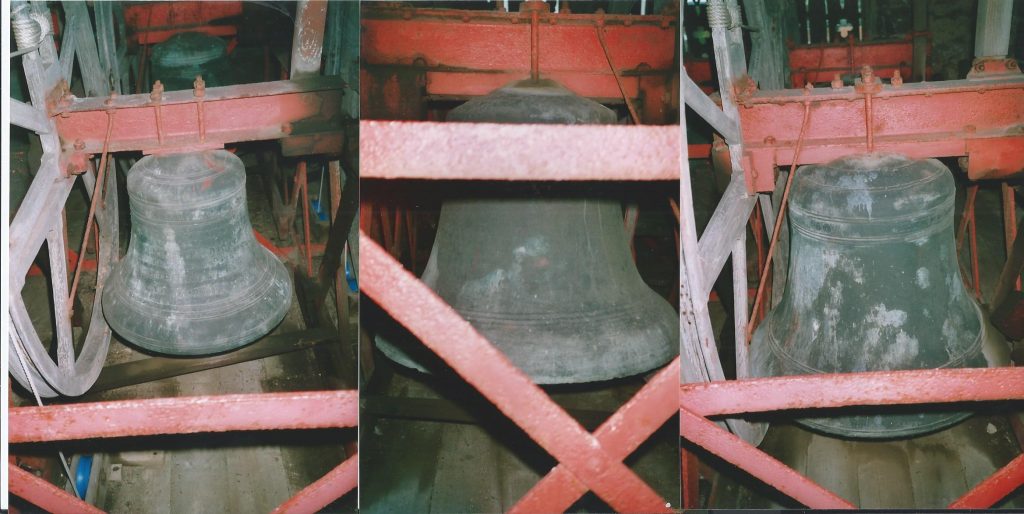 The bells are rung from the first-floor ringing room installed in the early 1950s. The tower itself underwent significant restoration in 1964, which included installation of the current ringing room ceiling, but no work was done on the bells themselves. 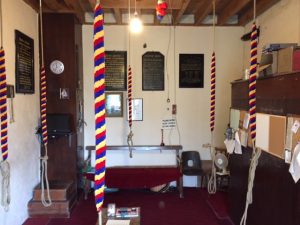 The present clock is by John Smith & Sons of Derby, 1888, the same date as the major restoration of the Abbey. It has a two-train flat-bed mechanism with a single face on the East side of the tower and strikes the hour on the tenor bell. The clock runs for seven days and is manually wound.  When the bells are in the up position or being rung, the clock is silenced; the clock hammer is temporarily restrained to prevent it from striking and damaging the bell.